The location of the points BL-22 Sanjiaoshu above BL-23 Shenshu and of Ren-5 Shimen above Ren-4 Guanyuan is interesting and it presents interesting parallels. This location can be understood only by reference to Chapter 66 of the Classic of Difficulties (Nan Jing). Chapter 66 of this text states: “The Original Qi is the Motive Force [Dong Qi] situated between the two kidneys, it is life-giving and it is the root of the 12 channels. The Triple Burner causes the Original Qi to differentiate [for its different uses around the body]; the Original Qi passes through the Three Burners and then spreads to the 5 Yin and 6 Yang organs and their channels.”1 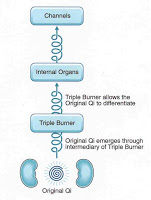 a) NatureBack-Shu point for the Triple Burner.

d) CommentsBL-22 is a major point to stimulate the transformation, transportation and excretion of fluids in the Lower Burner.

a) NatureFront-Mu point of the Triple Burner.
b) Actions:

1. Opens the Water passages and promotes the transformation and excretion of fluids in the Lower Burner.

In conclusion, the location of BL-22 just above BL-23 and of Ren-5 just above Ren-4 (a point that tonifies the Kidneys and is related to Jing confirms the above view of the Triple Burner as the agent allowing the Original Qi to emerge from between the Kidneys and be activated all over the body to perform its various functions.1. Nanjing College of Traditional Chinese Medicine 1979 A Revised Explanation of the Classic of Difficulties (Nan Jing Jiao Shi), p. 164. People’s Health Publishing House, Beijing, first published c. AD 100.