This short passage summarizes most of the aspects of the Triple Burner:

1) It stems from the Yuan Qi (discussed in the August Clinical Tip).
2) It governs all Qi of the body (we shall see how below).
3) The Triple Burner has “a name but no form”, i.e. it is not an actual organ but a function.
4) It pertains to the Shao Yang with the Gall-Bladder.
5) It is a Fu. 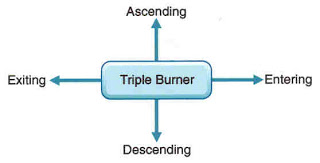 Take the shoulder as an example. On the scapula we have Tai Yang (Small Intestine channel), on the lateral side of the arm we have the Shao Yang (Triple Burner channel) and further forward the Yang Ming (Large Intestine channel). Within this zone of the body, the Tai Yang area is on the most Yang area (the scapula), the Yang Ming on the most Yin area (because it is near the Lung channel) and the Shao Yang in the middle: this ties in with the view that the Tai Yang “opens onto the Exterior”, the Yang Ming “opens onto the Interior” and the Shao Yang is “the hinge”. Exactly the same reationship exists in the Yin between Tai Yin (most exterior of the Yin), Jue Yin (the hinge) and Shao Yin (most interior of the Yin). 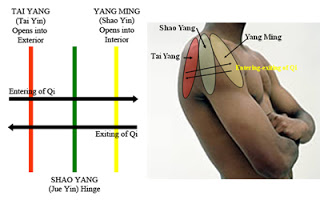 Notice how it recommends the use of points in the front and the back for each area: in the chest, use the front of the chest and Back-Shu points; in the abdomen Back-Shu points and Chong Mai points; in the legs, ST-30 (front of leg) and BL-57 (back of leg). This suggests a “horizontal” movement of Qi within each area.The Triple Burner controls the ascending/descending and entering/exiting of Qi in the Qi Mechanism. One of the words most frequently used in Chinese books to describe this function of the Triple Burner is tong 通 which means “free passage”, “to pass through”, “penetrate”: this describes the function of the Triple Burner in ensuring that Qi passes through in the Qi Mechanism, in all the cavities and in all organs.

This whole process is called “Qi Transformation by the Triple Burner”: the result of the Qi transformation is the production of Nutritive-Qi (Ying Qi), Defensive-Qi (Wei Qi), Blood and Body Fluids. That is also why the Triple Burner is said to control “all kinds of Qi”.The “Central Scripture Classic” (Zhong Zang Jing, Han dynasty) says: “The Triple Burner is the three original Qi of the body, it is the Yang organ of clear [Qi], it controls the 5 Zang and 6 Fu, Ying Qi and Wei Qi, the channels and the Qi of the interior and exterior, left and right, above and below. When the Qi of the Triple Burner has free passage, Qi passes freely into interior, exterior, left, right, above and below. The Triple Burner irrigates the body, harmonizes interior and exterior, benefits the left and nourishes the right, it conducts upwards and descends downwards.”3

With regard to the movement of Qi, it is useful to compare and contrast this function of the Triple Burner with those of Liver in ensuring the free flow of Qi.The Liver ensures the free flow of Qi and this aids the ascending and descending of Qi in all organs, and especially in the Stomach, Spleen and Intestines: the Triple Burner’s influence on the ascending/descending and entering/exiting of Qi extends to all organs. Moreover, the Triple Burner controls the entering and exiting of Qi in all parts of the body and especially the body cavities: the Liver has no such function in relation to the body cavities.