The main clinical manifestations of allergic rhinitis (“hay fever”) are nasal congestion, a watery nasal discharge and sneezing. In a few cases it affects the eyes and the conjunctiva may become red and itchy. In 20% of cases there is also asthma in conjunction with the rhinitis.

Allergic rhinitis develops as a result of the interaction between the inhaled allergen and adjacent molecules of IgE antibodies. These adhere to the surface of the mast cells which line the nasal epithelium with the first exposure to the offending allergen. After the first exposure, the mast cells are “primed”, i.e. high levels of IgE antibodies adhere to their surface. With subsequent exposure to allergens, the IgE antibodies provoke an “explosion” in the mast cells with the massive release of histamine. Histamine itself causes an increase in permeability of the epithelium allowing allergens to reach IgE-primed mast cells. Sneezing results from overstimulation of the afferent nerve endings and starts within minutes of the allergens entering the nose. This is followed by a greatly increased nasal secretion and eventually nasal blockage about 15-20 minutes after contact with the allergen. 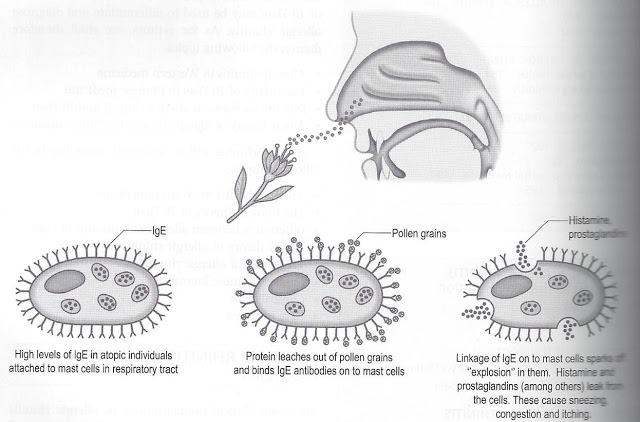 The Western treatment of allergic rhinitis relies mostly on the use of antihistamine agents. These work by preventing histamine from reaching its site of action, i.e. the H1 receptors and hence they are called H1-receptor blockers. Side-effects include sedation, dizziness, fatigue, insomnia, nervousness, and gastro-intestinal disturbances. Failure to respond to antihistamines is due to the fact that inflammatory chemicals other than histamine are released in allergic states.

The only exception among modern Chinese doctors is the book “New General Outline of Chinese Medicine” by the Guangzhou Army Health Department which attributes the pathology of allergic rhinitis to a Kidney deficiency and a deficiency of the Du Mai (as I do). The book also says specifically: “The Kidneys control sneezing. The Du Mai flows to the upper lip. Sneezing, stuffed nose, runny nose with a watery, clear nasal discharge is due to a deficiency of the Kidneys and of the Du Mai. Itchy nose is due to Wind.”

Please note that it is important to understand the difference between these two conditions as they are frequently confused. The term “allergy” or “allergic” is frequently used to describe the symptoms of sinusitis by both patients and practitioners. Sinusitis is not an allergic disease: it is an inflammation of the tissue lining the sinuses due to an infection. Normally, sinuses are filled with air, but when sinuses become blocked and filled with fluid, germs (bacteria, viruses, and fungi) can grow and cause an infection. By contrast, in allergic rhinitis, there is inflammation but no infection.

In sinusitis, the nasal discharge is thick and yellow and there is no sneezing; in allergic rhinitis, it is profuse, white and watery and there is sneezing.

In my experience, allergic rhinitis is characterized by Wind in the same way as in an external invasion of Wind (common cold). The allergens could be seen as a form of “Wind”. Wind obstructs the nose and it impairs the diffusing and descending of Lung-Qi: this causes sneezing and a congested nasal mucosa. This is the Biao [Manifestation] of this condition.

The Ben [Root] is a deficiency of the Kidneys and of the Du Mai. It is the Kidney deficiency that, on the one hand, allows Wind to enter the nose and, on the other, it is the cause of the allergic constitution. In allergic rhinitis, the Kidneys are involved not only in the Root of the disease, but also in the Manifestation through the Du Mai.

The Du Mai emerges from between the Kidneys and flows up the spine to the top of the head and then down to the nose and lips. It is therefore the channel connection between the Kidneys and the nose. For this reason the Kidneys are responsible not only for breathing, due to their function of grasping Qi, but also sneezing. Sneezing itself is also directly linked to the Kidneys and not necessarily due only to Wind. Chapter 23 of the “Simple Questions” says: “The Kidneys control sneezing.” Chapter 64 of the “Simple Questions” discusses the consequences of inserting a needle into an organ and, for the kidneys, it says: “If we pierce the kidneys, this will cause sneezing and death will ensue within 6 days.”

Thus the hyper-reactivity of the immune response of allergic rhinitis is due to a deficiency of the Kidneys and of the Du Mai. With regard to the role of the Du Mai in allergic rhinitis, it is interesting that many of the herbs which Li Shi Zhen connected with this vessel are expelling-Wind herbs which act on the nose. These herbs are Fang Feng Radix Saposhnikoviae, Cang Er Zi Fructus Xanthii, Jing Jie Herba Schizonepetae, Qiang Huo Rhizoma seu Radix Notopterygii, Xi Xin Herba Asari and Gao Ben Rhizoma Ligustici.

The symptoms and signs of allergic rhinitis are those of Wind-Cold as the nasal discharge is always white and watery. This indicates a deficiency of Wei Qi which is spread by the Lungs but has its root in the Kidneys. Thus, although some books do refer to a Kidney deficiency as the Root of allergic rhinitis, the Kidneys are responsible not only for the Root of this disease, but also for the Manifestation through their direct connection with the Wei Qi and sneezing and with the Du Mai (which flows through the nose).

The treatment of seasonal allergic rhinitis depends on the season. During the allergic season (usually Spring), we must treat the Manifestation (Biao), i.e. expel Wind.

During the pollen season, the patient must be treated frequently, i.e. at least once a week or more frequently.

5. Another interesting connection between the Kidneys and rhinitis could be observed in the use by some Chinese doctors of injection of cortisone in the point BL-12 Fengmen with far fewer side-effects than in a systemic administration of cortisone. If we view cortisone as a kind of “Kidney tonic”, it would make sense to inject it in the point BL-12 which expels Wind and spreads Wei-Qi in the Exterior.