Points of the Heart channel have a marked effect in stopping pruritus (itching). The two main points for this are HE-7 Shenmen and HE-8 Shaofu, the latter being stronger. Using Heart points for itching is the equivalent of using herbs that calm the Mind and nourish the Heart (such as Ye Jiao Teng Caulis Polygoni multiflori or Bai Zi Ren Semen Biotae orientalis) which also stop itching.

Stopping itching is extremely important in eczema and is the first treatment strategy one should adopt because, as this disease causes intense itching, the scratching resulting from it perpetuates the disease by causing excoriation of the skin and possible infections.

The Heart channel is related to the Kidney channel within the Shao Yin channels. It is also indirectly related to the Kidneys through the Du Mai and Ren Mai, both of which flow through the Heart and originate from the space between the Kidneys. Both the Du and Ren Mai have a profound influence on sexuality and sexual function including sexual desire, sexual arousal, erection, maintenance of erection and ejaculation. Furthermore, the Chong Mai also starts from the space between the Kidneys and goes to the Heart and, in addition, it controls the zong muscles in the abdomen which many interpret as being the penis.

There is yet another important connection between men’s sexual function and the Heart via the Minister Fire of the Ming Men. The Minister Fire is a special type of Fire that can actually generate Water: thus, the Fire and Water within the Kidneys are inseparable and interdependent. The Minister Fire warms and nourishes the Room of Sperm: when it is deficient, the Room of Sperm is cold and this may cause impotence or lack of libido; when it is excessive, it flares upwards affecting the Heart and Pericardium.

The Room of Sperm, located in the Dan Tian is also called Bao, a term that applies to both men and women and that is therefore often erroneously translated as “Uterus” (Zi Bao is the Uterus). In women, the Uterus corresponds to the Lower Field of Elixir (Dan Tian) which in men houses the “Room of Sperm”. The “Golden Mirror of Medicine” (Yi Zong Jin Jian, 1742) says: “The Du Mai arises within the lower abdomen, externally in the abdomen, internally in the Bao…also called Dan Tian in both men and women: in women it is the Uterus, in men it is the Room of Sperm“.

This passage clearly shows that Bao is a structure common to both men and women being the Uterus in women and the “Room of Sperm” in men. The extraordinary vessels arise from this area. We can therefore consider the Pericardium (Xin Bao) and Room of Sperm (Jing Shi) (also called Bao) as two centres of sexuality, one in the Upper Burner, the other in the Lower Burner: it is the coordination of these two centres that control sexuality and specifically in men, libido, erection, orgasm and ejaculation.

These two centres, the Heart and Pericardium above and the Minister Fire of the Kidneys below, regulate the ascending and descending of Fire and Water and mutually nourish each other.

Thus, in men we can use the Heart channel points to treat sexual dysfunctions such as impotence or premature ejaculation which are often due to Heart-Qi not descending to the Lower Burner to communicate and link with the Kidneys. That is why, in most cases, all the common animal Kidney-Yang tonics such as deer antler, dog’s penis, seal penis or sea-horse seldom have much effect.

The main points for this function are HE 7 Shenmen and HE-3 Shaohai. I often combine the point HE-7 Shenmen with the opening points of the Du Mai. An example of a point combination for a man complaining of impotence or premature ejaculation against a background of mental-emotional problems would be SI-3 Houxi on the left, BL-62 Shenmai on the right, HE-7 Shenmen on the right and LIV-3 Taichong on the left if the pulse is Wiry, or KI-3 Taixi if there is also a Kidney deficiency and the pulse is Weak and Fine. 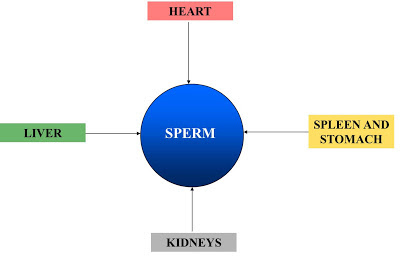 Connection with the Uterus

There is also another important connection and that is via Blood: the Heart governs Blood and the Uterus stores Blood. Although the overwhelming majority of gynaecologists will emphasize the role of Liver-Blood in relation to the Uterus, some put the accent on Heart-Blood. Thus, when they want to nourish Blood in gynaecological problems, these gynaecologists would nourish Heart-Blood with points such as HE-7 Shenmen and BL-15 Xinshu.

Moreover, the famous Qing dynasty’s gynaecologist Fu Qing Zhu said that the Tian Gui (i.e. menstrual Blood and ova) derives from the Kidney-Jing but with the assistance of Heart-Yang which must flow down to communicate with the Kidney-Jing. Thus, tonifying the Heart, will necessarily help Kidney-Jing to produce menstrual Blood. This is probably the reason why Gui Pi Tang, which nourishes Heart Blood, is such an important formula in gynaecological problems.

Dr Yao Shi An mentions several patterns of the Heart which affect the gynaecological functions.
Women are prone to stagnation of Qi, this often turns into Fire which affects the Heart; Fire harasses downwards and disturbs the Ren and Chong Mai, the Sea of Blood becomes reckless and this may result in Heavy Periods or Flooding and Trickling. The “Ji Yin Gang Mu” says: “Fire burns the Heart, Blood becomes reckless and causes bleeding downwards“.

Sadness over a long period of time may cause Heart-Yin deficiency, the Mind has no residence, this causes Heart-Yang to float and may cause menorrhagia. The “Simple Questions” says in chapter 44: “Sadness leads to severance of the Uterus Channel: when this is severed Yang Qi is agitated in the Interior and the Heart causes menorrhagia“.

When Heart-Qi rebels upwards, it impairs the descending of Lung-Qi; Qi cannot descend and communicate with the Uterus Vessel and amenorrhoea results. The “Simple Questions” says in the chapter Ping Re Bing Lun: “If the periods do not come it means the Uterus Vessel is shut…Qi rises to harass the Lungs, Heart-Qi does not descend and the periods do not come“.

Overwork weakens Heart-Yin which leads to Empty Heat: this may also cause amenorrhoea. The “Secret Record of the Orchid Room” (Lan Shi Mi Cang) says: “Mental strain and stress weaken the Heart, Heart-Fire rises and the periods do not come“.

When there is Fire in the Heart channel, it rises to harass the Heart and the mouth and below it may cause excessive vaginal discharge. Chen Zi Ming says: “Vaginal sores in women are due to mental restlessness and chaotic Heart and weak Stomach-Qi resulting in stagnation of Qi and Blood“. The “Simple Questions” in the chapter Zhi Zhen Yao Da Lun says: “Pain, itching and sores are due to the Heart“.

The book “Explanation of Acupuncture Points” recommends tonifying HE-8 Shaofu for prolapse of the vagina or vaginal pain and itching. The “Great Dictionary of Chinese Acupuncture” mentions HE-5 Tongli for heavy periods or Flooding and Trickling, especially in combination with LIV-2 Xingjian and SP-6 Sanyinjiao (Great Compendium of Acupuncture, 1601).