This is the fourth and last part of Sexuality in Chinese Medicine.

Chinese medicine has always stressed the importance of excessive sexual activity as a cause of disease but not insufficient sexual activity. This has not always been so as, during past dynasties, all sex manuals explicitly say that sexual activity is essential for the health of both men and women. Indeed, sexual abstinence was viewed with suspicion (as Buddhist nuns were).

The current pruderie of Chinese medicine is clearly a result not so much of the Communist influence but of the Qing dynasty’s Confucian influence. As we have seen, the Confucianists frowned upon sexual activity and believed that it should be carried out in secret and there should be no public display of affection (as in modern China until recently).

It is important to understand, however, that these rules did by no means imply that sex was a “sin” and woman was the origin of such sin as in the Christian view: nothing could be further from the truth. The Confucianist abhorrence of sexual philandering was determined mainly by the fear that promiscuity might disrupt the sacred family life, and also by their reverence for the process of human procreation, a solemn process that must not be debased by superfluous amorous play.

Therefore, although the Confucianists considered women as inferior to men, this idea appeared natural to them as that of Earth being inferior to Heaven, thus inferior in a philosophical sense rather than in a concrete sense; it did by no means imply that they hated or despised women, as many medieval Christian thinkers and mystics did.

Moreover, women had their own vested rights, and one of them was the right to satisfaction of their sexual needs. Although physical contact was strictly limited to the marital bed, there the husband had to give all his women the personal attention he was supposed to deny them as soon as they had left the bed. The Li Ji (one of the Confucian classics) mentions sexual neglect of one of the women as a grave offence; neither age nor beauty should make the husband deviate from the strict protocol set for sequence and frequency of his sexual intercourse with his wives and concubines.

As we have seen, from the latter part of the Ming dynasty onward, Chinese society became more and more straight-laced and frowning on matters of sex. We have also seen how Chinese doctors considered lack of sex and sexual frustration as a major cause of emotional stress in women: this is all the more likely to happen as, as we have seen, women’s sexuality is more complex than that of men and they therefore need a man who is expert in the sexual art and foreplay.

Sexual desire depends on the Minister Fire and a healthy sexual appetite indicates that this physiological Fire is abundant. When sexual desire builds up the Minister Fire blazes up and Yang increases: the orgasm is a release of such accumulated Yang energy and, under normal circumstances, it is a beneficial discharge of Yang-Qi which promotes the free flow of Qi.

When sexual desire builds up, the Minister Fire is stirred: this affects the Mind and, in the terms of organs, specifically the Heat and Pericardium. The Heart is connected to the Uterus via the Uterus Vessel (Bao Mai) and the orgasmic contractions of the uterus discharge the accumulated Yang energy of the Minister Fire.

When sexual desire is present but does not have an outlet in sexual activity and orgasm, the Minister Fire can accumulate and give rise both to Blood Heat and to stagnation of Qi in the Lower Burner. This accumulated Heat will stir the Minister Fire further and harass the Mind, while the stagnation of Qi in the Lower Burner can give rise to gynaecological problems such as dysmenorrhoea.

With regard to sexual frustration, Qing dynasty’s Chen Jia Yuan wrote very perceptively about some women’s emotional longing and loneliness. Among the emotional causes of disease he distinguishes “worry and pensiveness” from “depression”.

He basically considers depression, with its ensuing stagnation, due to emotional and sexual frustration and loneliness. He says: “In women…such as widows, Buddhist nuns, servant girls and concubines, sexual desire agitates [the mind] inside but cannot satisfy the Heart. The body is restricted on the outside and cannot expand with the mind [i.e. the mind longs for sexual satisfaction but the body is denied it]. This causes stagnation of Qi in the Triple Burner and the chest; after a long time there are strange symptoms such as a feeling of heat and cold as if it were malaria but it is not. This is depression”.

Although the above thoughts derive from Dr Chen’s clinical experience with servant girls, Buddhist nuns and concubines and should therefore be seen in the social context of the Qing dynasty, they also have relevance to our times as he is essentially talking about sexual frustration and loneliness and his reference to widows confirms this (in old China widows were shunned and seldom remarried). He perceptively refers to sexual craving agitating the Heart and Mind but not finding a satisfaction in the body: besides sexual frustration, he is also referring to emotional frustration and craving for love.

A constant theme of all this was also SEPARATION: the emotions resulting from separation (sadness and grief) are often at the root of Qi stagnation, not of the Liver, but of the Heart and Lungs and some times development of breast lumps and breast cancer. It is important to realize that stagnation of Qi comes not only from the Liver but also from Lungs and Heart, especially Lungs. In fact, even emotions that cause depletion of Qi such as sadness and grief, may cause stagnation of Qi (of the Lungs) because, when Qi is depleted in the chest, it does not circulate well and therefore stagnates.

In the particular case of breast lumps, the stagnation of Qi of the Lungs and Heart is particularly relevant because these two organs and channels are situated in the chest. Zhu Dan Xi says: “When a woman is worried and depressed, accumulation develops, Spleen-Qi becomes weak, Liver-Qi rebels horizontally, stagnant Qi turns into nodules like turtle eggs, there is no pain or itching. After 10 years ulcers develop and the disease is called Ru Yan [breast cancer]”.

This statement clearly points out the emotional influence on the development of the disease and also its long term development. It is important to remember that stagnation of Qi in women is very often secondary and the consequence of a deficiency of the Liver and Kidneys affecting the Ren and Chong Mai.

The modern doctor Xia Shao Nong thinks that breast cancer is due to widowhood, breaking of relationships, divorce, death of one’s children, bereavement at a young age from the loss of one’s spouse. These events, especially if occurring suddenly, upset the mind and lead to Qi stagnation. It is interesting that all the events this doctor cites have to do with separation.

The Uterus Vessel (Bao Mai) connects the Uterus to the Heart: since the Heart is always affected by emotional problems (because it houses the Shen), this connection explains the profound influence of emotional stress on the menstrual function. For example, the “Su Wen” in chapter 33 says: “When menstruation does not come, this is due to the Uterus Vessel being blocked. The Uterus Vessel pertains to the Heart and connects with the Uterus; when Qi rebels upwards towards the Lungs, Heart-Qi cannot flow downwards and the periods do not come”. “Qi rebelling upwards towards the Lungs” describes in particular the effect of worry, sadness or grief. 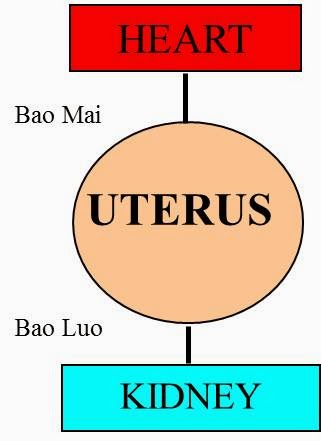 Emotional problems are all the more detrimental in women if they occur around the time of puberty. At this time, a girl’s health is particularly vulnerable and emotional problems will affect her body and mind deeply and with long-lasting effect. In particular, emotional stress at this time will deeply affect the Ren and Chong Mai creating the imbalances that will cause gynaecological problems later in life.

The “Golden Mirror of Medicine” says: “Women are frequently affected by worry, pensiveness, anger or depression: these make the Blood move, stop, rebel or conform, which is all due to Qi movement”.

Qing dynasty’s Chen Jia Yuan wrote with regard to worry: “Worry injures the Lungs and pensiveness injures the Spleen, when these two organs are injured Qi and Blood stagnate, there is a feeling of indignation, palpitations, a feeling of oppression of the chest and amenorrhoea”. This passage confirms that stagnation of Qi affects not only the Liver but also that amenorrhoea may occur from stagnation as well as from a deficiency.

Thus, considering the social position of women in ancient China and the frequency of the above-mentioned emotional and sexual frustrations, it is no wonder that Qi stagnation (not always of the Liver) occupies such a central place in women’s pathology, and we can also conclude that emotional stagnation in women was often the result of sexual frustration, separation and loneliness: these are the recurrent “anger” in Chinese medicine books.

This is essentially the clinical meaning and application of Xiao Yao San. As sexual frustration in women is fairly common in our society (often deriving from men’s sexual inadequacy or inexperience), Dr Chen’s observations on the influence of sexual frustration on stagnation of Qi and depression acquire particular relevance. This is often a cause of disease somewhat akin to emotional stress.

What have we got to learn from Daoist sex? One thing that stands out is how the Daoist sex manuals never mention “love”. Sex seems to be an exercise in moving Qi, releasing the Minister Fire and exchanging Yin and Yang essences with the partner. Both the Daoists and the Confucianists removed love for different reasons and never mention love (although the old poems do). The modern Chinese have even removed the “heart” from the “love” ideogram!

However, there are some useful lessons for us:

1. Differences between men’s and women’s sexuality: many men could learn from that.
2. Importance of women’s orgasm and sexual frustration as cause of Qi stagnation.
3. Importance of men’s expertise in sexual techniques and foreplay.
4. Blow the myth of simultaneous orgasm and the importance of orgasm in men. If the man is particularly experienced, the woman could have multiple orgasms before his.
5. Western sexuality fixed on orgasm, hence Western men often unskilled: this causes female frustration. Modern men can learn from Daoist sex to allow for the difference between Water and Fire and therefore women’s slower response.