SEXUALITY AND THE EXTRAORDINARY VESSELS

Human sexuality is closely linked to the physiology and pathology of the extraordinary vessels, especially the Du, Ren and Chong Mai.

The Du and Ren Mai are the expression of Fire and Water respectively with regard to sexuality: the exchange of sexual essences and of Yin and Yang during sexual intercourse takes place through the intertwining of the Du and Ren Mai during intercourse. 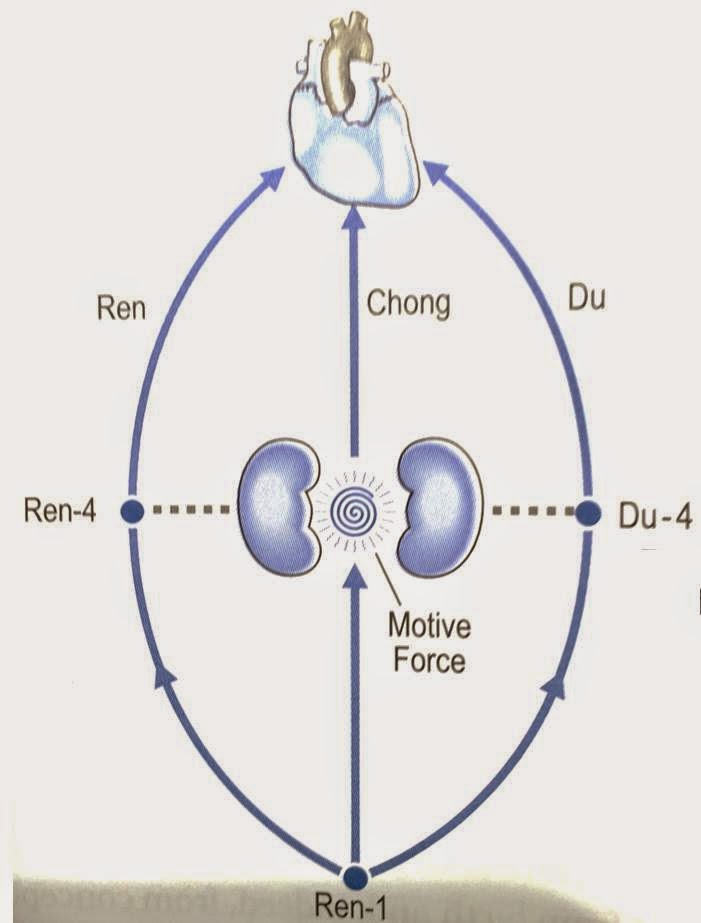 Both these vessels arise from the space between the Kidneys where the Yuan Qi throbs: they then flow down to the perineum where they separate, one following the spine up to the brain, the other following the front up to the face and eyes. However, internally they intersect and both flow through the heart.

The “Su Wen” in chapter 60 has the following pathway for the Du Mai: it starts near the uterus, goes down to the pubic bone, in women to the vagina. Its Luo channel goes around the vagina, passes to the perineum, then the buttocks, down to meet the Kidney and Bladder channels inside the upper thighs; it then rises up the spine and wraps around the kidneys. In men it goes around the penis and then the perineum. We can therefore see that, besides flowing up the back, the Du Mai flows to the genitals and is therefore stimulated by sexual intercourse. 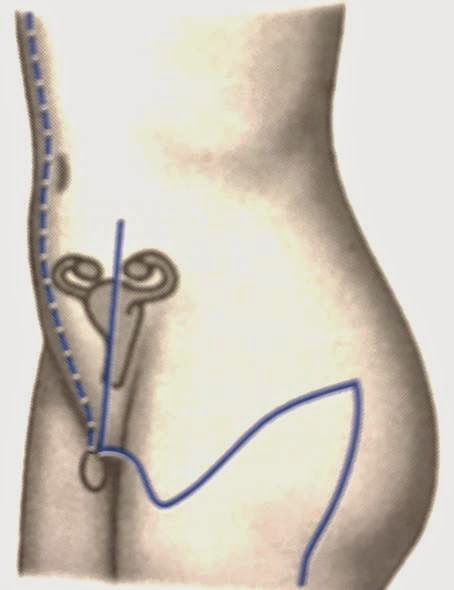 Chapter 60 of the Su Wen also describes an abdominal branch of the Du Mai that starts in the abdomen, goes up to the umbilicus, past the heart, throat, chin, around lips and reaches the eyes.

Some see this “main vessel” as being the Ren Mai. In fact, what it means is that the Du and Ren Mai are almost like two branches of the same vessel, one Yang and one Yin, intersecting inside. Li Shi Zhen says: “The Du and Ren Mai are like midnight and midday, they are the polar axis of the body…there is one source and two branches, one goes to the front and the other to the back of the body…we can make connections between them. When we try to divide these, we see that Yin and Yang are inseparable. When we try to see them as one, we see that it is an indivisible whole.”

Wang Big considered this “main vessel”, not as the Ren Mai but as a branch of the Du Mai flowing with the Ren Mai: “Another branch [of the Du Mai] starts in the lower abdomen, comes up the abdomen, to the centre of the eyes, following the pathway of the Ren Mai. This is why we can say that the Du, Ren and Chong Mai have different names, but are all the same.”

Thus, the Du Mai embodies the Minister Fire and the Ren Mai Water: the contact of the penis inside the vagina establishes the link between the Du and Ren of the man and woman and therefore the exchange of Yin and Yang sexual essences between them.

Moreover, if the partners also kiss simultaneously, the communication between the Du and Ren is established not only below but also above as the Du Mai ends on the upper gum and the Ren Mai flows to the mouth, thus completing the circle. 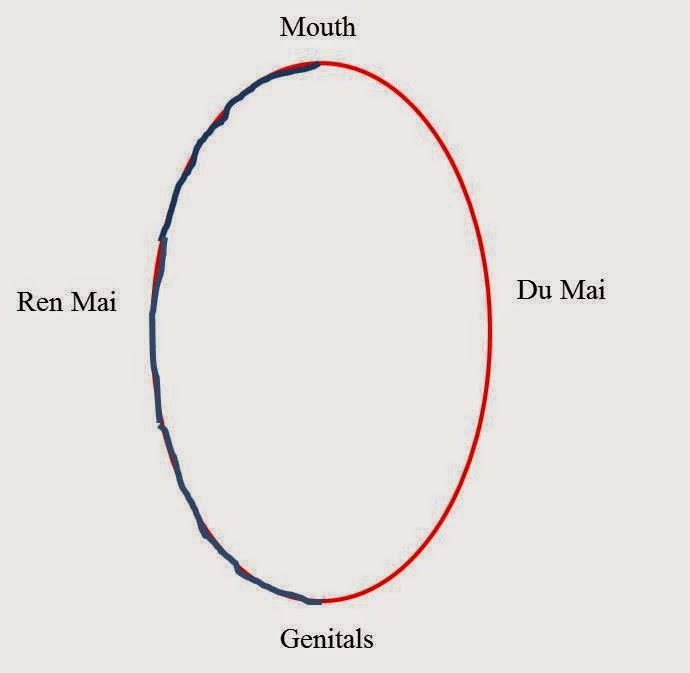 The three dan tians are of course closely linked to the Du and Ren Mai.

Upper Dan Tian: this is variously identified as the point Yintang, Du-20, a point between the eyes, the centre of the brain called “ni wan” or the centre of the chest. In any case, all these points are either on the Du or the Ren Mai.

There are actually three Dan Tian on the same level: one anterior on the Ren, one in the middle on the Chong and one posterior on the Du (Du-4). 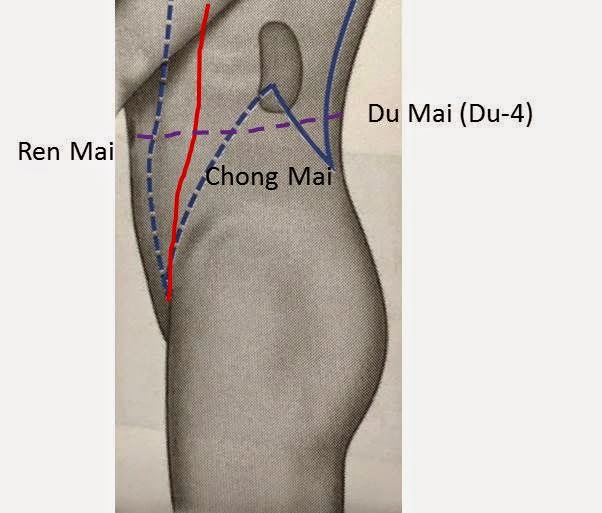 Some Chinese sex manuals give three different locations for women: 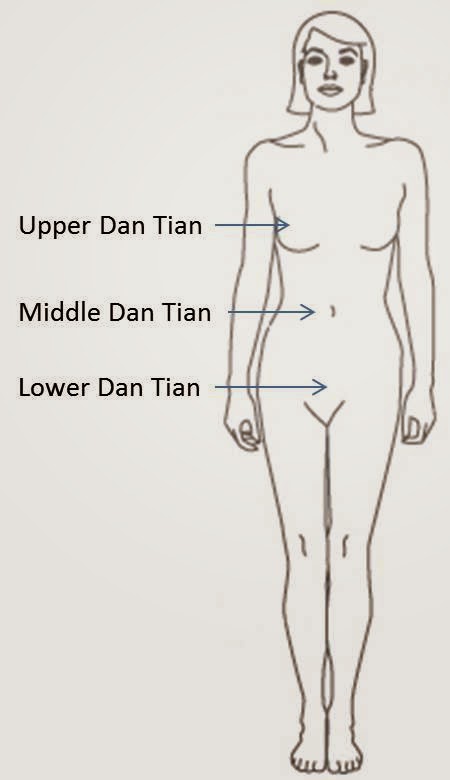 The three passes are also along the Du Mai; they are like energetic bottlenecks through which Qi has to pass in its ascent to the brain. The lower pass is at the coccyx; the middle is in the middle of the thoracic vertebrae; the upper is at the occiput. 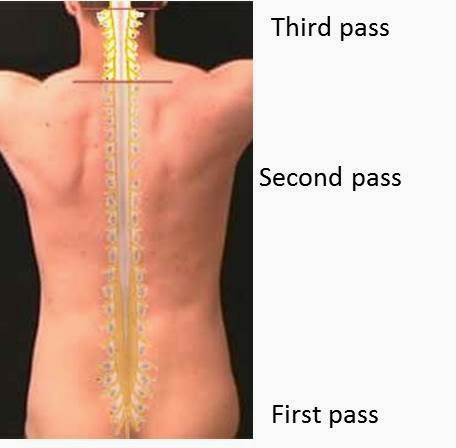 The Three Peaks are related to the Ren and Chong vessels. In a woman, the Three Peaks are the mouth, breast and vagina: during intercourse, the man can absorb a nourishing Qi and fluids from these three peaks.

The Kidneys and the Ren Mai are related to the salivary glands: the Qi of the Kidneys is stimulated during sexual intercourse, it rises in the Du Mai, flows into the mouth and is transformed into sweet salivary elixir. This saliva is considered to be a Kidney tonic and should be swallowed while mentally directing it to the Lower Dan Tian. For this reason, absorbing the woman’s energy and fluids from the Upper Peak is particularly beneficial.