In 1992 an Italian neurophysiologist in Parma was doing brain research using macaque monkeys. They were specifically researching an area of the brain called F5, located in the premotor cortex. 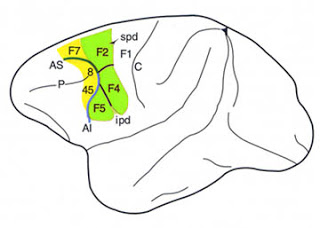 Area F5 contains millions of neurons that specialize in coding for one specific motor behaviour: actions of the hand, including grasping, holding, tearing and, most important, bringing objects (food) to the mouth. As Iacoboni explains “For every macaque these actions are as basic and essential as they come. We Homo Sapiens are grasping and manipulating objects from the moment we fumble for the snooze button in the morning until we adjust our pillows at bedtime. All in all, we perform hundreds, if not thousands, of grasping actions every day.”1 That it why the Rizzolati team chose area F5 for close investigation.

One day the neurophysiologist Vittorio Gallese was moving around the lab during a lull. A monkey was sitting quietly in the chair; suddenly as Vittorio reached for something, he heard a burst of activity from the computer that was connected to the electrodes surgically implanted in the monkey’s brain. To an experienced neurophysiologist, this signalled a discharge from the pertinent cells in area F5. Vittorio immediately thought that this was strange as the monkey was sitting quietly not grasping anything, yet the neurons affiliated with the grasping action had fired nevertheless.

Through many other painstaking experiments, the neurophysiologist came to the discovery that, within the F5 motor area, there are dedicated neurons (about 20%) that fire not when one performs an action but when one watches someone else performing an action e.g. grasping, bringing objects (usually food) to the mouth, kicking a ball, playing tennis, etc. They even fire when one simply hears a word such as “kick”. Mirror neurons imitating a grasping action fire even when the object grasped is hidden from view (behind a screen), but not if the monkey knows that there is no object.

Crucially, mirror neurons are involved in predicting the meaning of a certain action: this is essential in communicating and relating to others. Iacoboni says: “The action recognition process implemented [by the mirror neurons] is some sort of simulation or internal imitation of the observed action. Given that our own actions are almost invariably associated with specific intentions, the activation in my brain of the same neurons I use to perform my own actions may also allow me to understand the intentions of other people.”2 For example, if I watch someone grasping a cup soon after having an argument with that person, thanks to the mirror neurons, I know whether he or she is grasping the cup to get a drink or whether they are about to throw the cup at me. Quiet simply, mirror neurons differentiate between the same action associated with different intentions.

It is now thought that mirror neurons play a role in empathy, the capacity to feel other people’s emotions. The brain area connecting mirror neurons to the limbic system (responsible for our emotions) is the insula. In other words, we feel and understand the emotions of other people thanks to our own mirror neurons which are activated by the sight of someone’s smiling, frowning, crying, etc. Thus, “our mirror neurons fire when we see others expressing their emotions, as if we were making those facial expressions ourselves. By means of this firing, the neurons also send signals to emotional brain centres in the limbic system to make us feel what other people feel.”3

Essential to this empathy based on mirror neurons are other people’s facial expressions that trigger the firing of our mirror neurons. To James (of the James-Lange theory of emotions), this phenomenon means that “our mental life is knit up with our corporeal frame, in the strictest sense of the term.”4 Incidentally, that is the connection between emotions and the Po in Chinese medicine.

There is now a mirror neuron hypothesis in relation to autism. In autism there is an “imitation deficit”, i.e. the child is unable to translate from the perspective of another individual to one’s own perspective. It is now believed that the key neural deficit in autism is a dysfunction of mirror neurons. As Iacoboni says, “a deeply felt mirroring that moves people closer to each other and makes emotional connectedness possible seems to be the main deficit of patients with autism.”5

What has all this to do with Chinese medicine and, in particular, with Shen and Hun? I think there are interesting connections between the role of Shen and Hun and mirror neurons. Shen and Hun together are responsible for emotional empathy and relating to others. Consider the Chinese ideogram for “shen”. 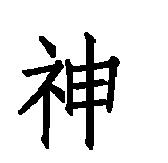 The right side of the ideogram is very interesting: it is pronounced “shen” and it means “to express, to explain, to stretch, to extend“. 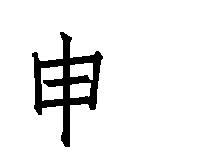 The last two meanings, “to stretch” and “to extend”, are crucial to an understanding of what the Shen does. It is responsible for “extending” towards others, for connecting with others, for emotional connection and empathy. In other words, for the function of the mirror neurons.

However, the Shen cannot perform that function alone: it relies on the help of the Hun and that is why ancient books say that Shen and Hun are related work in unison (they are both Yang in nature), as opposed to the relation between Po and Jing (both Yin in nature).

How does the Hun help the Shen? The Hun is responsible for a different type of consciousness than that of the Shen. It is responsible for intuition, planning, life dreams, ideas, inspiration and, incidentally, also artistic inspiration. How does the Hun perform these functions? Through its movement: the Hun is always moving in the sense of searching, exploring ideas, nurturing life dreams, etc. Without the input of the Hun the Shen would be an inert consciousness. The input of the Hun is therefore essential for the Shen to perform its function of relating and connectedness with others. Again, this is the Chinese medicine equivalent of the function of mirror neurons.

5. Iacoboni, Mirroring People, p. 175. The left part of the ideogram (by itself pronounced shi) indicates something spiritual, it evokes heaven and stars, also an ancient altar for sacrifices, signs from Heaven. I like the word “numinous” in relation to this quality of Shen.