“Men” is a common symptom in Chinese medicine. The Chinese character shows a door and a heart inside it. Thus, it would seem to indicate a heart constricted by a door closing on it. I translate this symptom as “a feeling of oppression of the chest”. Men is very difficult to translate and my translation is an attempt to convey the meaning of this symptom: it certainly does not claim to be the “correct” translation of men as most Chinese medicine terms have multiple, simultaneous meanings. 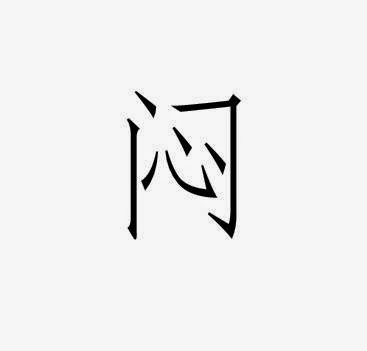 Chinese patients will actually use the term men: they might say, for example, “I sleep badly, I have a bitter taste and feel men.” In my experience, when a Chinese patients says that it means they are depressed.

A feeling of oppression of the chest is purely subjective: there is nothing to be observed or palpated (as there is in feeling of fullness or distension). Some patients would describe it as a “feeling of weight” on the chest. Other patients may use the term “tightness of the chest.”

Men indicates Phlegm or severe Qi stagnation. Men occurs in the chest or, less frequently, in the epigastrium; it does not occur in the lower abdomen.

The term men first appears in chapter 19 of the Su Wen where it is described as a feeling of fullness of the chest with anxiety and blurred vision.

There is another condition characterized by men called “Rising Men Qi” (Men Qi Sheng), a condition that affects newborn babies. It is characterized by a feeling of men in the umbilical area, the baby is not crying and has difficulty breathing.[i]

Men is rich in meaning and, in my experience, it describes not only a physical sensation in the chest but also a mental-emotional state of anguish associated with it. A feeling of oppression of the chest reflects emotional stress especially to do with sadness, grief, worry, shame and guilt. I find this symptom very common in the patients we see.

Chronic anxiety often manifests with the feeling of men in the chest and depression may also be accompanied by this symptom.

The presence of men indicates two things: first, that there is Phlegm; secondly, that the Lungs and/or Heart are involved.

This Phlegm may be of a non-substantial kind and there may not necessarily be any expectoration of mucus (usually there is not). Its main manifestation is precisely the feeling of oppression of the chest and possibly a Swollen tongue and a Slippery pulse.

The main points I would use for a feeling of oppression of the chest are Ren-17 Shanzhong, Ren-15 Jiuwei, P-6 Neiguan, LU-7 Lieque and ST-40 Fenglong.

The main prescriptions that could be used are Ban Xia Hou Po Tang (Pinellia-Magnolia Decoction) or Wen Dan Tang (Warming the Gall-Bladder Decoction).