Latent Heat or “Latent Pathogenic Factor” is a pathology that is quite unique and rather difficult to comprehend. Essentially, Latent Heat is formed when an exterior pathogenic factor invades the body without causing symptoms at the acute stage: the pathogenic factor goes into the Interior, it changes into Heat and it then emerges later in the form of interior Heat. I said that Latent Heat is “unique” and “difficult to comprehend” because, if the pathogenic factor invades the body without causing immediate symptoms, how do we know that it has happened? I shall try to answer this question and others as we progress in the discussion.

Therefore, there are two types of attacks of exterior pathogenic factors: a new attack of Wind-Heat with acute onset and obvious symptoms; and an attack of Latent Heat which, at the acute stage, has no symptoms.

The distinction is based on the different aetiology and different clinical manifestations in the beginning stage. In Wind-Heat, the pathogenic factor attacks the body with acute onset and with frank clinical manifestations. In Latent Heat, the pathogenic factor invades the body in an insidious manner without acute-onset symptoms, becoming latent in the Interior. When it emerges causing symptoms, it is called Latent Heat.

The concept that a pathogenic factor may invade the body without causing acute symptoms at the time but causing symptoms in the following season is very old and is found in the Nei Jing.

The earliest statements concerning Latent Pathogenic Factor are in the Su Wen chapters 3 and 5. Chapter 3 says: “Attack of Wind in Spring will lead to diarrhoea [in Summer] if the pathogenic factor lingers; attack of Summer-Heat in summer will lead to malaria in the Autumn; attack of Dampness in Autumn will cause cough [in Winter] and then Wei Syndrome; attack of Cold in Winter will cause Wen Bing in Spring.”

Generally, a New Attack is comparatively light, in the beginning the pathogenic factor is on the Exterior and it affects the Lungs: there is fever, aversion to cold, headache, cough, etc. This is treated by releasing the Exterior and stimulating the diffusing and descending of Qi.

The Latent Attack is comparatively serious, there is Heat in the Interior from the beginning: there is fever, thirst, restlessness, etc. i.e. symptoms of interior Heat (no aversion to cold unless there is a concomitant New Attack with it). It is treated by clearing interior Heat.

Notice how the Nei Jing says that an invasion of Cold in Winter will cause “Wen Bing” disease in the Spring. “Wen Bing” refers to diseases due to Wind-Heat. In the times of the Nei Jing and the Shang Han Lun, the pathology of exterior diseases was always due to Cold: therefore even diseases that clearly started with Heat symptoms (such as Wind-Heat) were deemed to be a transformation of Cold invading in Winter. It took about 14 centuries before the theory of Wen Bing diseases became an independent theory, i.e. that diseases from Wind-Heat were not a transformation of Cold.

Nevertheless, the idea that a pathogenic factor may invade in Winter, incubate without symptoms and then manifest in the Spring is at the root of the pathology of Latent Heat. The pathology as described in the Nei Jing is illustrated in the diagram below.

The main cause of the development of Latent Heat, i.e. that the patient does not display symptoms at the time of infection and the pathogenic factor lurks in the Interior to emerge later, is a Kidney deficiency which causes the immune system not to react to the initial external invasion.

A contributory factor are immunizations. It could be said that immunizations inject a pathogenic factor directly at the Blood level which then emerges as Latent Heat causing many different symptoms. In normal immunity when someone is infected, the pathogenic factor penetrates from the Wei level and leads to immunity to that bacteria or virus.

The answer lies in the immune response. If the immune system does not react, the pathogenic factor does not cause symptoms and penetrates into the Interior, to emerge later. This lack of immune response depends not only on the Lungs but also on the Kidneys.

Ye Tian Shi said that the “lurking Cold” of Winter resides in the Kidneys. Remember the Nei Jing statement “If Jing is not guarded in Winter, Wen Bing develops in Spring”.

Ye Tian Shi even advocated tonifying the Kidneys to prevent invasion of external pathogenic factors. Some doctors of the late Qing too correlated the severity of Latent pathogenic factor to Kidney and specifically Kidney-Yin.

Ye Tian Shi said that Latent Heat is due to “lack of storage” [of Jing] in Winter. This allows Cold to invade the body in Winter. The Kidneys control storage and Shao Yin; in Spring, the pathogenic factor emerges towards Shao Yang and the Liver and Gall-Bladder.

Another explanation is that Winter Cold invades the Tai Yang channels, it lurks inside and is transmitted to the Shao Yin.

Another doctor says that when the Winter Cold is heavy, it causes a New Invasion with immediate symptoms; if the Winter Cold is light, it causes Latent Heat after incubating inside.He says that in the latter case, the pathogenic factor enters the skin and then lurks in the Triple Burner and Membrane Source (Mo Yuan) causing a derangement of the ascending/descending of Qi and the free flow of Qi. This causes stagnation of Qi that gives rise to internal Heat. This Heat is then attracted outwards by the emerging Yang of Spring.

This is an interesting statement that actually explains how external Cold is transformed into internal Heat when Latent Heat is formed. The “Membrane Source” (Mo Yuan) refers to the Shao Yang regions.

Many doctors relate the formation of Latent Heat to a Kidney deficiency. For example, one says that Winter controls storage and so do the Kidneys. When the Kidneys are healthy, Kidney-Yang and Kidney-Jing are “stored” in winter so that Cold cannot invade the body.

Conversely, if mental restlessness, overwork and excessive desire afflict a person, Yang Qi is dispersed, Yin is consumed and pathogenic factors can easily invade the body taking advantage of the Empty condition.
Thus, as we have seen in several of the above passages, the Kidneys and Kidney-Jing play an important role in the immune response.

THE YUAN QI AND IMMUNE RESPONSE

Chapter 8 of the Nan Jing says: “Sometimes the Cun Kou is normal and yet the patient dies. Why is that? The pulses of the 12 channels all originate from the Yuan Qi. This Yuan Qi is the root of the 12 channels, it is the Motive Force (Dong Qi ) between the Kidneys, the root of the 5 Zang and 6 Fu and of the 12 channels, the gate of breathing and the origin of the Triple Burner. It is the spirit that guards against pathogenic factors (or evil influences). Such Qi is the root of humankind; if the root is cut stalks and leaves wither. When the Cun Kou is normal but the patient dies, it means that the Yuan Qi has been cut off internally.”

This is of huge clinical significance because it means that our resistance to pathogenic factors depends not only on the Wei Qi and therefore Lungs but also on the Kidneys and the Yuan Qi (and also Jing due to the extraordinary vessels). In any case, Wei Qi stems from the Lower Burner.

SYMPTOMS and SIGNS of LATENT HEAT


There may be many other symptoms of Heat such as red eyes, mouth ulcers, nosebleed, constipation. These are the general symptoms and there is a great variation of symptoms and signs depending on the location and character of the Latent Heat (Qi, Ying, Blood).

As mentioned above, please note that “emerging” does not mean that the Latent Heat is being expelled but simply that it is manifesting itself.

Latent Heat emerges due to one or more of the following factors:
New invasion of Wind
Rising Yang of Spring that pulls it out
Emotional stress
Overwork
Serious illness
Medication
Drugs

HOW DO WE KNOW IT IS LATENT HEAT AND NOT JUST HEAT?

If we happen to see a patient at the onset of Latent Heat emerging, we know that it is Latent Heat from the acute onset. The patient complains of lassitude with acute onset and he or she does not have exterior symptoms, so we exclude an invasion of an exterior pathogenic factor.

So, the acute onset together with the clinical manifestations of Heat tells us that it is most probably Latent Heat emerging from a previous external invasion which did not cause symptoms at the time.

If we do not see the patient during the acute onset, it is more difficult. How do we know that it is Latent Heat? First of all, from the channel location that is either Shao Yang (not common) or Shao Yin, i.e. Heart and Kidneys. Secondly, Latent Heat will cause more vague, less specific clinical manifestations of Heat than those of Heat in a specific organ, e.g. Heart-Heat, Stomach-Heat, Liver-Heat, etc.

WHAT DIFFERENCE DOES IT MAKE TO TREATMENT?

The treatment of Latent Heat is not really different than that of Heat. Latent Heat is treated by clearing Heat, usually at the Blood level. However, when treating Latent Heat, I also tonify the Kidneys, usually only with one or two herbs or with acupuncture.

WHAT DIFFERENCE IT MAKES TO PROGNOSIS

It makes a big difference to prognosis. The treatment of Latent Heat is more difficult than that of Heat and it will take longer. Also, Latent Heat tends to cause difficult diseases such as auto-immune diseases.

Latent Heat can be in the Shao Yang or Shao Yin. One must distinguish its depth, severity and Xu/Shi nature. Latent Heat in Shao Yang is Shi; in Shao Yin, Xu.

Please note that the above prescriptions are only examples from Chinese books and many other formulae can be used.

Bouts of exhaustion for the previous four months (starting in Winter), can hardly move in the morning, muscles have no strength, feeling of heaviness, feeling cold from waist down, muzziness (fuzziness), dizziness, sticky taste, painful eyes, chronic sore throat.

Diagnosis
The onset of the exhaustion indicates Latent Heat. The presentation of the acute attack weeks before is of the Shao Yang type but most probably Latent Heat type. Now the Heat has injured the Spleen, hence the loose stools. The hypochondrial pain indicates Shao Yang pattern.

Diagnosis
The onset of the exhaustion indicates Latent Heat. The presentation of the acute attack weeks before is Latent Heat in the Shao Yang and the joints. 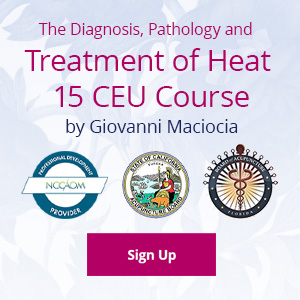