Cervical intraepithelial neoplasia (CIN), also known as cervical dysplasia and cervical interstitial neoplasia, is the potentially premalignant transformation and abnormal growth (dysplasia) of squamous cells on the surface of the cervix.  Most cases of CIN remain stable, or are eliminated by the host’s immune system without intervention. However a small percentage of cases progress to become cervical cancer, usually cervical squamous cell carcinoma (SCC), if left untreated.

The major cause of CIN is chronic infection of the cervix with the sexually transmitted human papillomavirus (HPV), especially the high-risk HPV types 16 or 18. Over 100 types of HPV have been identified. About a dozen of these types appear to cause cervical dysplasia and may lead to the development of cervical cancer. Other types cause warts.

The earliest microscopic change corresponding to CIN is dysplasia of the epithelial or surface lining of the cervix, which is essentially undetectable by the woman. Cellular changes associated with HPV infection, such as koilocytes, are also commonly seen in CIN. CIN is usually discovered by a screening test, the Papanicolaou or “Pap” smear. 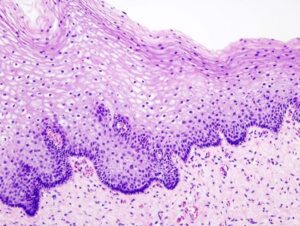 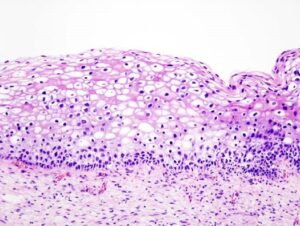 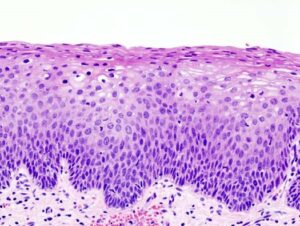 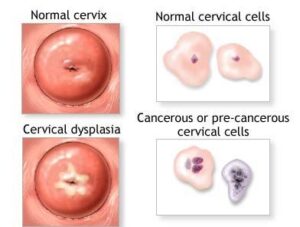 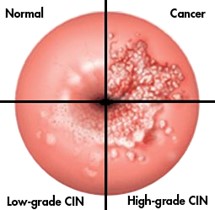 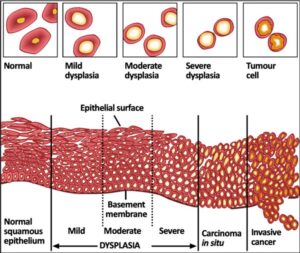 Loop electrical excising = wire loop through which an electric current is passed at variable power settings. The cervical transformation zone and lesion are excised to an adequate depth, which in most cases is at least 8 mm, and extending 4 to 5 mm beyond the lesion.

Conization = a biopsy of the cervix in which a cone-shaped sample of tissue is removed from the mucous membrane. Conization may be used either for diagnostic purposes, or for therapeutic purposes to remove pre-cancerous cells.

Cervical dysplasia is characterized by three abnormalities: a disorderly maturation or a lack of differentiation of the squamous epithelial cells; nuclear abnormalities; and increased mitotic activity.  This condition’s incidence is in direct correlation with the age of onset of sexual intercourse and the number of sexual partners, i.e. the younger the age of regular intercourse and the higher the number of partners, the higher the risk of developing cervical dysplasia.  The relationship between cervical squamous precancer and sexual intercourse is beyond doubt as the condition is virtually unknown in celibate women.

The exposed area of columnar epithelium on the ectocervix is called transformation zone because, over years, the columnar cells are replaced by squamous epithelium by a process of metaplasia.  The risk of developing cervical cancer or CIN is increased if the transformation zone is exposed to a sexually-transmitted virus at a time of maximum cellular activity during adolescence.  This fact is in agreement with the Chinese view that sexual activity at an early age is detrimental to the Chong and Ren Mai because the Uterus and these vessels are in a vulnerable state at such an age. 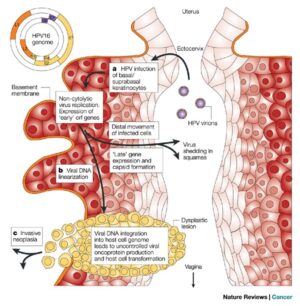 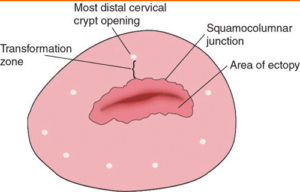 Cervical dysplasia in its various stages, carcinoma in situ and invasive carcinoma of the cervix are now recognized as a continuum of the same disease.  There are three stages of severity of cervical intraepithelial neoplasia (CIN):

∙  CIN 3 to severe dysplasia and carcinoma in situ.

After these three, the next stage would be invasive carcinoma which has a very poor prognosis: its main sign is vaginal bleeding brought on by coitus, micturition or defecation. The bleeding later becomes continuous and when the growth ulcerates there is a blood-stained discharge.

The staging of invasive cervical carcinoma is as follows:

∙  Stage IIA: tumour extending to the upper third of the vagina

Although the above terminology stresses the continuing nature of the process leading from CIN 1 to carcinoma, in cervical dysplasia, this is not an inexorable progression from one stage to the next: for example, it is quite possible for cases of CIN 1 to revert to normal.  Furthermore, many cases of CIN, regardless of the grade, never progress to the next stage.  From a Chinese perspective, whether a case of CIN progresses through the various stages or remains stationary (or even reverts to normal) depends on the state of that person’s Zheng Qi.

Cancer and Zheng Qi are like the two sides of a pair of scales: when one goes up, the other goes down.  Thus, anything that makes the body’s Qi go up (with treatment and healthy lifestyle) will make cancer reverse or stay stationary.

CIN is diagnosed through the Papanicolaou (Pap) smear, while colposcopy allows the accurate localization of the abnormal epithelium.

Treatment may consist in any of the following procedures:

Whichever treatment is adopted, the aim is to destroy the transformation zone entirely to a depth of 6 mm.  Cone biopsy involves the excision of a cylinder of tissue from the cervix so that the entire transformation zone is excised: this procedure is both diagnostic and therapeutic.

From the point of view of Chinese medicine, this condition would have been diagnosed in the old times only at its invasive stage, i.e. when it manifests with vaginal bleeding and, later, a blood-stained, offensive discharge, by which time the carcinoma is already quite advanced and probably can’t be addressed with Chinese medicine.  Thus, to address cervical dysplasia we must obviously rely on a Western diagnosis with the Pap smear test.

As for its aetiology, it is often due to onset of regular sexual intercourse at too early an age which injures the Chong and Ren Mai.  Adolescence is a very vulnerable time in the life of a girl and any cause of disease at this age has serious consequences.  In fact, other causes of disease may play a contributory role.  Invasion of external Dampness easily invades the genital system in women and may form the basis for the development of dysplasia or cancer.  Emotional problems at puberty time also have a very deep influence on a girl’s life: they may cause stagnation of Qi in the Liver which easily affects the genital system in women.  After some time, Qi stagnation may turn into Blood stasis and cause masses.

Thus, the pathology is characterized first and foremost by a deficiency of Zheng Qi and a weakness of the Chong and Ren Mai; in addition, there may be Dampness, stagnation of Qi, stasis of Blood.

As for the treatment, there are no specific formulae for CIN in its three stages: it is sufficient simply to identify the main patterns and address these accordingly.  There will always be an underlying deficiency that may involve the Liver and/or Kidneys: this may be a deficiency of Qi, Yang, Blood or Yin.

In addition, there may be pathogenic factors and particularly Dampness and/or Liver-Qi stagnation.  If deficiency predominates, one should tonify Qi, Yang, Blood or Yin primarily and modify the formula with herbs to resolve Dampness or move Qi according to the case.  If Fullness predominates, one should start with a formula that resolves Dampness or moves Liver-Qi and modify it with the addition of tonic herbs.

Acupuncture is effective in treating cervical dysplasia and the main points would be:

– Ren-3 Zhongji and BL-34 Xia Liao to resolve Dampness from the genital system (reducing or even method).

– BL-53 Baohuang to resolve Dampness from the cervix (reducing or even method).

– LIV-5 Ligou to move Liver-Qi in the genital area (reducing or even method).

– SP-9 Yinlingquan, SP-6 Sanyinjiao and BL-22 to resolve Dampness from the Lower Burner (reducing or even method).

Normally, to address benign or malignant tumours, one needs to use some herbs that “break” Blood, some that dissolve masses, some that resolve Phlegm and some that resolve Toxic Heat, according to the case.    However, in the case of CIN 1 and CIN 2, there is no tumour but only cell changes that may later give rise to a tumour: thus, in these cases, there is no need to resolve Phlegm, “break” Blood, dissolve masses or resolve Toxic Heat.  In such cases, I would simply add one or two anti-cancer herbs to one of the following formulae:

To each of these formulae I would add one herb with an anti-cancer effect such as Bai Hua She She Cao Herba Oldenlandiae diffusae or Ban Zhi Lian Herba Scutellariae barbatae (6g). 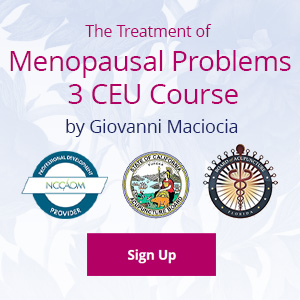 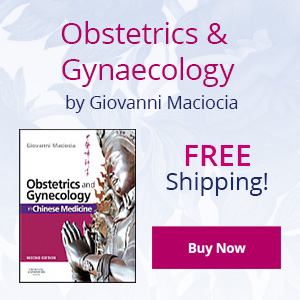